One year ago today, 11 July 2012, Lennox’s family discovered that he had been put to death by order of Belfast City Council.

They will never know if the outcome might have been different without the manipulated and grossly flawed testimonies of Sandie Lightfoot and Peter Tallack, coupled with the actions and words of a few equally malignant, lying, callous fools.

Belfast City Council, without an ounce of common decency, did not tell the family Lennox had been killed. That task was left to Victoria Stilwell who had arrived in Belfast with the sole intention of asking BCC to consider releasing Lennox to her. Prior to that, Sarah Fisher had made a request to the Council asking if she could be with Lennox on the day of his death, and return his body to the family.

Belfast City Council ignored or refused all pleas and requests.

Disgusting behaviour, much like one of their employees, and it’s a good time to remind certain people that, despite their self-righteous arrogance, sooner or later their past and blatant lies will catch up with them.

Newcomers to the blog may not know that Sandie Lightfoot stalked Lennox’s family, even after his death – naturally she’s always denied it.

Lightfoot has been accused of routinely sitting outside their home on a regular basis, in full view of neighbours and passers-by, doing nothing in particular, just smoking and fiddling with her phone.

Lightfoot says it never happened. Her close friends and acquaintances, Mel Page, Melanie Rushmore, Sarah Gunther, have always backed up her story, knowing it was just another big fat lie : 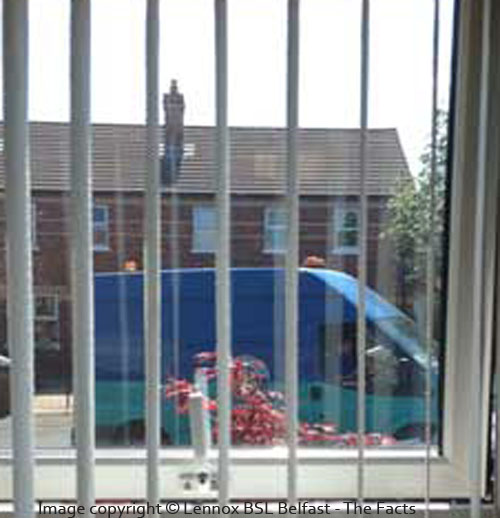 Any close friend of Lightfoot’s will be able to confirm where she’s parked on that particular day. We say ‘particular day’ because this was not an isolated incident. And needless to say, the van details, times, dates and duration of Lightfoot’s little ‘visits’ were recorded and passed on. Tax-payers of Belfast must surely hope other Council employees don’t make a similar habit of wasting public money.

Of course it’s quite possible Lightfoot had another day off on that occasion and found herself with nothing else better to do except sit in a Council vehicle, wearing her Council uniform, texting away (or pretending to) for some considerable time, before driving off.

There’s no need for us to publish the family’s address – the Hate Campaign wasted no time in doing that months ago. In fact at one point they ‘amused’ themselves, with an image which Lightfoot had obviously supplied [»» link ««]. If the photo in that link wasn’t taken by her then it must mean other members of the HC were stalking the family as well.

Courtesy of Google Maps, an address search shows the buildings seen in the background of the first two images above:

This site uses Akismet to reduce spam. Learn how your comment data is processed.